It was the men in Red who dominated the opening five minutes, of this IFC clash at pairc tailteann on Tuesday night, with Harry Ryan kicking his first free in the third minute. But it was all Clann na nGael for the next ten minutes as they cut through the Ballinlough defence in the fifth minute and were shurly in on goal only for a solid shoulder from Podge Muldoon to avert the danger. The Athboy men got their first score in the 6th minute and they took the next three scores, an all important goal in the 10th minute, followed by two close range frees that were sent sailing over the bar against the wind.

Harry Ryan got his second from a placed ball on the 15 minute mark and that score signaled it was time for the water break and for both teams to regroup for a moments respite.

Whatever Tommy Hanley said to his charges in that minutes break had the desired effect because from the kick out, Clann na nGael bounded up the field at pace and really should have put the ball in the back of the net, only to be denied by the crossbar, they did claim the rebound and had to settle for a point instead of the three on offer.

Benji Smith kept the Ballinlough scoreboard ticking over with a fine point after some patient build up play before Clann na nGael kicked another fine effort from play between the sticks.

The introduction of Simon Deevey and Ronan McGuinness added some much needed impetuousness to the Ballinlough attack, and their presence was felt immediately as the Clann na nGael rearguard were forced into conceding two frees in quick succession, which Harry Ryan duly sent over the bar to bring his personal tally of the evening to 4 points from the placed ball.

Ballinlough were left to rue some wayward kicking in the first half, and perhaps a small bit of poor shot selection or option taking was at play, allowing Clann na nGael to take the final score of the half in the 32nd minute to leave the sides Ballinlough 0-05 to Clann na nGaels 1-06 when referee Kieran Olwell blew the short whistle.

Already facing an uphill struggle against the strong breeze, the task suddenly became a mountain for Ballinlough when from the first attack of the second half, Clann na nGael finished cooly to the net to extend their lead. They added a 45’ moments later, followed by two further points, one from play and one free, to leave them firmly in control of this contest with a 10 point lead.

Credit to the Ballinlough lads they didn’t let the heads drop and thanks to some seriously strong running by Seanie Geraghty and Peader Byrne, Benji Smith was able to hit his second point in the 42nd minute before Harry Ryan converted another free. Ryan also got himself a point from play in the 44rd minute.

Substitutes Ronan McGuinness and Simon Deevy were making a nuisance of themselves at every opportunity and it was these two who combined for Ballinlough’s next score and arguably the point of the match, when Deevey played the ball across the square, and McGuinness, knowing he hadn’t time to use his hands, swung a foot at it and caught the ball sweetly on the volley and sent it rifling over the bar.

Unfortunately for Ballinlough who managed to reduce the deficit to six, Clann na nGael seemed to weather the storm of a revived Ballinlough attack, and it was the town team who took the next three points all from play.

Tommy McCullen got his name on the score board with a great score from play in the 53rd minute and there were mutterings that if the Lough could get a goal now we might just have a game on our hands.

There was a goal coming but sadly it went the wrong way as while Ballinlough pushed men forward, they got caught in possession and Clann na nGael broke with extreme pace outnumbering the remaining defenders 4 to 2, so there was only one place the ball was going, even though there were calls for square ball, Linesman Martin Dawson did a good job of explaining the rule to us mere mortals!

To add further misery, Ballinlough lost Mark McCullen to a black card in the 56th minute so had to see out the remainder of the game with 14 men, and despite the scoreline the lads in Red were determined to see this game out and to go down fighting. They got a much deserved goal in the 59th minute, an absolute bullet from Simon Deevey that left the Clann na nGael keeper with no chance.

That’s as good as it got for Ballinlough, and when Clann na nGael kicked their final score in the 63rd minute, referee Kieran Olwell blew the final whistle with the new Intermediate side taking a famous victory home with them on a scoreline of Ballinlough 1-10 to Clann na nGaels 3-13. 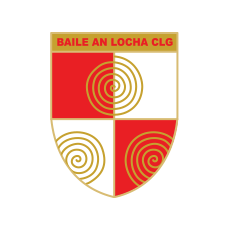 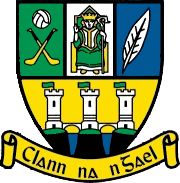