On a perfect summer evening in the idyllic setting of Kildalkey, Carnaross and Boardsmill served up a thoroughly entertaining and high scoring encounter with Carnaross just edging an unfortunate Boardsmill.

Boardsmill began brightest registering the first 3 points of the game with their direct running and sharp shooting. Carnaross responded through the trusty boot of Frank O’Reilly from a placed ball. O’Reilly was causing havoc in the Boardsmill rear guard and doubled his tally soon after. Boardsmill showed their prowess with 2 points on the bounce to lead 5-2 at the first water break.

Carnaross were struggling to find their rhythm and Boardsmill surged ahead to lead 8 points to 4 with 20minutes played. Their physicality around the middle third coupled with their accuracy from open play was rewarded on the scoreboard. Indeed they might have been further ahead but their inaccuracy from placed balls proved costly.

The Ross picked up the pace and began to narrow the margin. Niall McDonnell split the posts after good link up play before Frank converted two offensive marks. This included one effort where he was tripled marked and had to signal for the mark by putting his hand through the legs of his Boardsmill opponent while on his knees. This left Boardsmill ahead 8 points to 6 at half time and they were full value for their lead.

A response was needed or else Carnaross faced the possibility of exiting this year’s championship. Respond, they did. In the third quarter they registered 2-6 in a blistering spell.

Dillon Fox opened the scoring for the second half with a well taken point from distance. Frank registered another point before Carnaross began to grab a hold of the game by securing possession time and time again in the middle of the field. Luke Gillic excelled in this period catching a number of marks from kickouts which guaranteed forward momentum.

The first goal of the game arrived after good work from Paddy McDermott along the end line set up Frank who waited patiently for an opening before rifling it into the net. Paddy McDermott continued to flourish and took the game to Boardsmill with another direct run to goals, resulting in a point. Frank converted another two frees, one that he created himself and the other was created by the rampaging McDermott. Boardsmill replied with 3 points of their own but the second Carnaross goal was a sucker punch for them.

Frank collected the ball in the corner and set off leaving his two markers for dead. He ran in along the end line looking to square it for a teammate to palm into the net but instead opted to finish it himself with his left foot.

This left Boardsmill facing an uphill battle in the final quarter but they proved why they will be a force to be reckoned with for the next few years at this grade. They chipped away at the scoreboard to narrow the margin back to 3 points. In fairness to the Carnaross defence they snuffed out any potential goal chances with Roche and Fleming ensuring the victory with some professional fouls. Frank kicked over 2 frees either side of Boardsmill points to keep the margin at a dangerous 2. Carnaross won the final 2 kickouts with Cillian Comaskey intercepting a short kickout opting to kick over the bar guaranteeing a three point win for the Ross.

Carnaross were marginally the better team and their excellent third quarter showing was the difference between the two sides. Boardsmill are an impressive outfit with speed, power and youth on their side and will only improve after two epic battles with Ballivor and Carnaross.

The aforementioned teams will meet in a mouth-watering winner takes all encounter in Trim in a fortnight’s time. 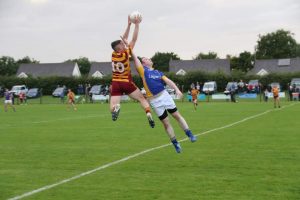 Meath GAA look for an exemption to play hurling deciders