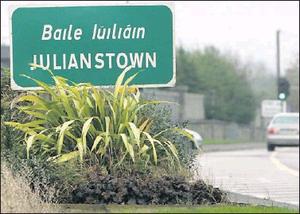 Motorists in an east Meath village were seriously distracted last week when a woman appeared on the side of the road and began flashing at them as they drove by.

And it wasn’t her car lights she was flashing either.

The woman was roadside, in the late evening, in Julianstown on Tuesday September 22nd and when she opened the long coat she was wearing had nothing underneath,

Sources told Meath Live, ‘Nobody is quite sure what this was all about but a number of locals seen what was happening and the fear was she’d cause a crash so someone rang the guards.

‘It was bizarre and there were suggestions that it was some kind of bet or dare but she disappeared before anyone could find out, it seems she was collected in a car  and vanished before gardai arrived.’

A Garda spokesperson said, ‘ We received reports of a woman allegedly exposing herself at Dimanistown East County Meath at approximately 7.50 pm and conducted a search of the area  but could find nobody present enquiries are ongoing.’