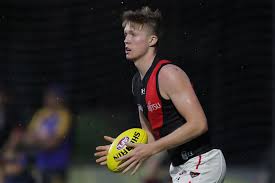 Ahead of their National Football League resumption against Dublin at Parnell Park next Saturday evening, it’s emerged that Cian McBride could feature for Meath in that game, after recently returning to Andy McEntee’s panel.

The St Ultans’ player has returned from down-under during the Aussie Rules off-season, and has been given permission by his club Essendon, to link-up with the County team.

The 19-year-old has just completed his first season in Aussie Rules, having lined-out with the Meath Under-20s last season, and before that, with the Minor team.

His move to Essendon came-about, after he excelled at the AFL Draft Combine, particularly in the vertical jump and 2km time trial.

For Andy McEntee, Mc Bride’s availability will be viewed as a big boost, going into the Leinster Championship Quarter Final against either Wicklow or Wexford on November 8th.

Over the next 2 weekends, Meath will be completing their National League Division 1 programme against Dublin, and then Monaghan… Although they’re already relegated, those 2 games will be seen as crucial preparation for that Provincial Championship encounter in 4 weeks’ time.