Rogers called time on his 21-year career in the League of Ireland last month, with his last game for Dundalk being a 4-2 defeat to Arsenal in the Europa League.

In recent times, Rogers has worked as a goalkeeping coach with native Meath, Cavan and Westmeath and RTE Sport reports this morning that he has now decided to link up with Monaghan ahead of the 2021 season.

It comes after McEnaney added highly-rated coach Donie Buckley to his backroom team in December, with the Kerry man having previously worked under Peter Keane in the Kingdom after helping Mayo to three All-Ireland SFC final appearances in six years.

Monaghan are set to be grouped with Armagh, Donegal and Tyrone in the newly formatted National League which is due to commence at the end of February. 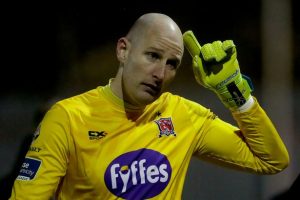