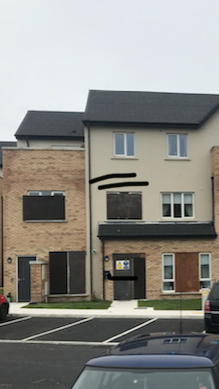 Gardai are investigating an incident in which a house at Dunville Avenue, off the Kenstown Road in Navan was attacked by a group of up to fifteen men, some believed to be from Dublin, at the end of last month, in which it is understood an individual was stabbed.

Our exclusive photographs show the property in the aftermath of the attack.

A source told Meath Live, ‘There was an altercation a few days earlier in which a person was assaulted and his associates then launched a retaliatory attack on the premises in Dunville Avenue, initially they actually targeted the wrong house.

‘There’s a video doing the rounds on social media in which youths can be heard shouting, ‘That’s the wrong gaff, it is further down’, before they eventually found the house they were looking for, the woman in the house they originally attacked got a terrible fright, she had nothing to do with anything and was traumatised.

‘Like most of these incidents, the suspicion is it is related to drug dealing in the town.’

A Garda spokesperson said, ‘Gardaí are investigating an assault incident that occurred in the Johnstown area of Navan on 28/03/2021 at approximately 7:15am.

‘A man, aged in his 20s, reported he was stabbed by an unknown male in the area. He was taken to Beaumont Hospital for treatment and has since been discharged.

”A man, aged in his late 20s, was arrested and charged in relation to this incident. He appeared before Navan District Court on 06/04/2021.

‘Gardaí are also investigating an incident that occurred at a house in the Johnstown area of Navan on 30/03/2021 at approximately 9:50pm.

‘The resident(s) of the house reported that a large group of males armed with blunt instruments caused damage to the house, windows broken.

‘Gardaí arrested a man, aged in his late teens, and he was later charged in relation to this incident. He appeared before Navan District Court on 02/04/2021’.