Ardee native Robert McKeever, who was a long time servant of NEFL club Ardee Celtic, is making a name for himself;f in another sport.

McKeever a no nonsense defender with the mid Louth side is currently in Morecambe in England, helping to prepare New Zealander Joseph Parker for his big heavyweight fight against Derek Chisora on May 1st.

Robert is part of Andy Lee’s coaching team, who look after Parker,  and the backroom boys 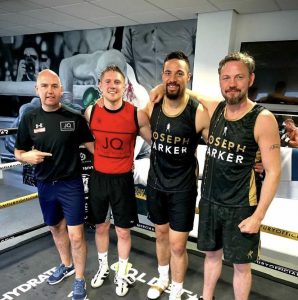 were based in Dublin for the past few weeks, before relocating to the UK for some sparring sessions.

Jason Quigley and Paddy Donovan are also at the Morecambe Base at present.

The Parker/Chisora fight is being-promoted by Eddie Hearn, and the undercard will include Katie Taylor’s fight against Natasha Jonas.