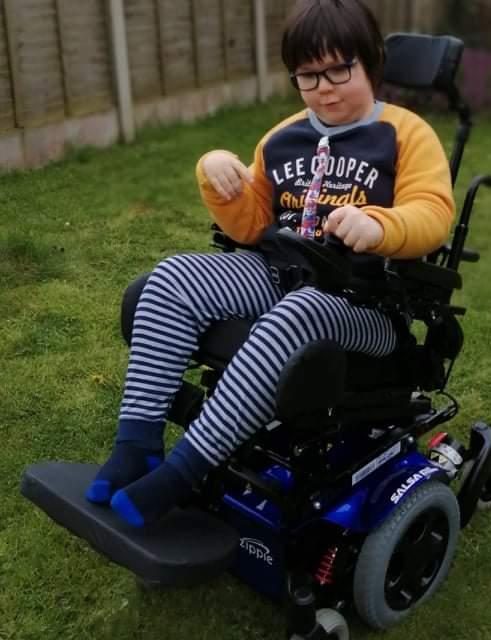 The parents of a severely disabled young boy have claimed that even when the current Covid restrictions are lifted they will still be in lockdown as they cannot afford the transport required to bring him anywhere.

David Butler and Maria Reynolds son Bear has Cerebral Palsy and a number of respiratory problems after he suffered a stroke at birth and while he has a power assisted wheelchair it is too big to fit in the family car and the couple, who live in Kilbeg, County Meath, have discovered there is no government funding available to offset the €60k cost involved in purchasing a wheelchair accessible vehicle.

David told the Mail On Sunday, ‘ We called him Bear as the Celtic word Bear means brave and strong and he is certainly that,

‘We knew straight after he was born there was a problem as he was having multiple seizures but it was only much later when we took him for CAT and MRI scans that we discovered that he had actually had a stroke.

‘He has a powered wheelchair now but it is too big for the boot of the car, and anyway he is starting to outgrow it, so we ned a new vehicle that is wheelchair friendly and while they can be sourced in Ireland the price of them is out of our reach.

‘Since 2013 when the Motorised Transport Grant was scrapped there is no government assistance for people like us, and believe me there are many many others in our situation.

‘Even simple things like hospital appointments are problematic as for appointments and therapies we have to visit Temple street in Dublin and Our Lady of Lourdes in Drogheda quite often and have no suitable transport, we live in a very rural area with no bus services, so it is incredibly difficult.

‘The appointments have all been cancelled due to Covid but now with the restrictions being lifted they are due to happen shortly but because they are not classed as emergency appointments we won’t be provided with an ambulance to take us there.

‘From day one we have had to put the war paint on and fight for everything he is entitled to but the lack of funding now is the last straw for us.

‘Bear also suffers from epilepsy and has seizures, he is on the autism spectrum and has visual and hearing impairments.

‘He is in pain constantly 24 hours a day so he is on a lot of pain relief. He has seizures and he limited because he can’t walk and only has the use of one arm’.

The family’s frustration has been compounded by Covid as they have been more or less confined to their house for over a year.

‘Because of Bears health issues he is more susceptible than most to the virus so we have been ultra cautious and stuck rigidly to the rules, Bear hasn’t seen his grandparents who live in Ashbourne and Ratoath since last March.

‘Everyday is a fight to get any kind of support or even basic services and it gets harder and harder. We are not alone in this as parents with a child with a disability you are kind of left behind, we are the forgotten, or rather the ignored people.’