Now strictly speaking this is not a Meath story but it is so good it deserves to be seen.

How good is it?

The dramatic event took place in Westport, County Mayo, at 6.30 pm, on Wednesday evening when Mammy duck led her new born into the Mill Street car park, before failing to find the exit and starting to panic at the noise.

Three women from the nearby Pax store, Tiffany, Jeanine and Anna were just leaving work when they spotted the ducks and could see they were in distress.

Tiffany told The Star, ‘Tiernan O’Rourke who works in another shop also saw they were upset so the four of went to try and catch them.

‘We decided to get the mother first as we thought if we caught her the ducklings would follow but the mother got scared and flew off.

‘The ducklings were a bit scared of us and waddled off in different directions, but we got five of them into a box however, once we had them we weren’t sure what to do with them, fortunately a customer in our shop knew someone in Mayo Animal Welfare and they were called in to help.’

The remaining two ducks had scurried to safety and were hiding behind a wall in front of a bicycle shed.

Tiffany said, ‘ It took us over an hour to get them out e had to pull away leaves and bushes and a lot of rubbish that had been dumped there before we eventually got them.

‘It wasn’t the kind of thing you expect to encounter after a days work but we had to do something as there cars driving everywhere and the ducks would have been run over.’ 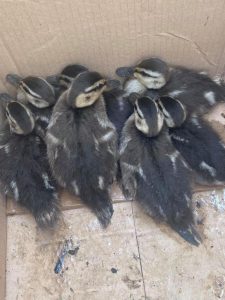 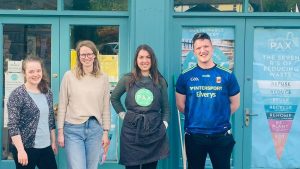 Slots to play for in Funtasia competition