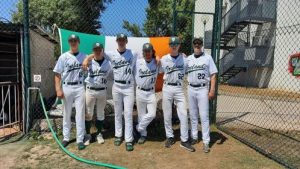 Five Ashbourne players are on the Irish squad that has lost the European final of the Baseball’B’ pool championship.

The Irish lads beat Hungary in the semi final but went down 12 -2 to hosts Slovakia in the decider.

We’ll have a report on the final up later.