Dunsany have a novel new sponsor

In the times that are in it, 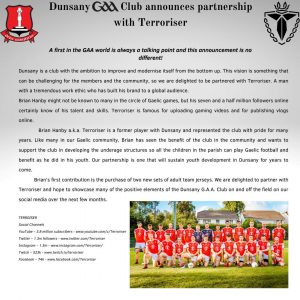 there’s probably nothing unusual about Dunsany GFC’s new sponsor, but it’s certainly a novel one.

The club has just received a couple of new strips for their adult team from the Terroriser.

And before you ask that is not their corner back, either of them!

He is apparently a gamer and social media standout and the press release below reveals more.

Brian Hanby a.k.a. Terroriser is a former player with Dunsany and represented the club with pride for many years. Like many in our Gaelic community, Brian has seen the benefit of the club in the community and wants to support the club in developing the underage structures so all the children in the parish can play Gaelic football and benefit as he did in his youth. Our partnership is one that will sustain youth
development in Dunsany for years to come.

Brian’s first contribution is the purchase of two new sets of adult team jerseys.
We are delighted to partner with Terroriser and hope to showcase many of the positive elements of the Dunsany G.A.A. Club on and off the field on our social media over the next few months.