Drogheda United have announced that manager Tim Clancy and assistant manager Kevin Doherty have both signed new two-year contracts with the club.

Clancy has been in charge of first team affairs since December 2017 after he spent the final 18 months of his playing career at Bray Wanderers.

Doherty was named as Clancy’s assistant ahead of the 2018 season.

In September 2019, Clancy and Doherty signed a new deal with the club as Drogheda narrowly missed out on promotion to the Premier Division in the play-off final against Finn Harps.

The duo did eventually guide the Boynesiders to promotion last October, sealing the First Division title with a 2-0 win against Cabinteely on the final day of the season.

Clancy said, “It’s the perfect place for myself to be at the moment, I love it here and I’m not looking to go anywhere. I advised them to get a deal sorted and it’ll keep me here for the next two seasons,” 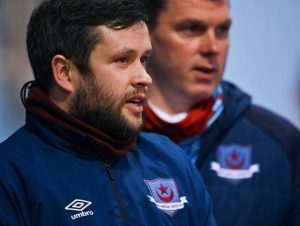 CLONEE MODEL GETS A KICK FROM SELF DEFENCE