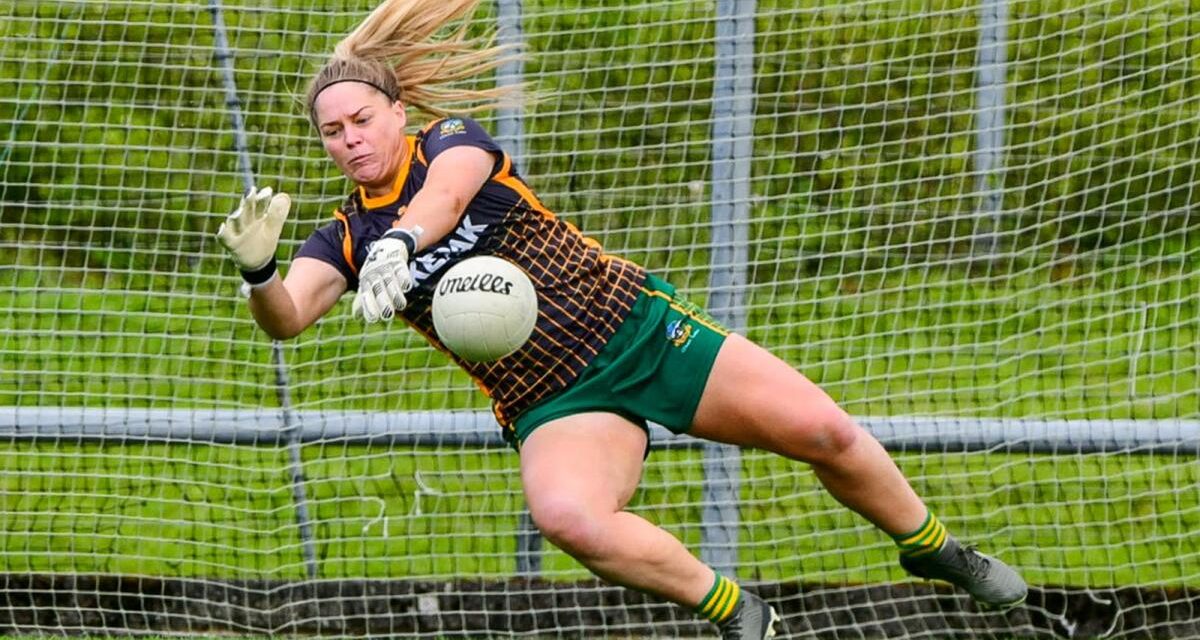 It is little wonder Monica McGuirk prefers to stay between the posts these days.

The last time she played out the field she got sent off!

She tells Meath Live,’ It is going back a few years and it was with the club, Duleek/Bellewstown, I deserved it, I was on a yellow and took an opponent out, I couldn’t say very much about it’,  before adding, ‘I have never been sent off as a goalkeeper in either gaelic or soccer.’

McGuirk’s stint as a shot stopper, which began in an under 12s soccer match and has seen her win an All Star two years ago has led to her not saying too much on the pitch anyway unless of course, she has to.

‘I wouldn’t be one of those ‘keepers who hands out a rollicking if a goal goes in, I’ve made enough mistakes myself to know there is no need for me to highlight it when somebody else messes up/

‘Biggest mistake I ever made was in soccer with Peamount United, a defender miskicked a ball that rolled, literally rolled back towards me, I pulled my hands away as I was sure it was going wide but it rolled into the corner of the net.

‘Best save was against Sligo in the division 3 final a few years back where a forward dummied me I bought it but recovered to knock the ball from her hands before she shot, and I always operate by the rule that it doesn’t matter how you save them as long as you save them’.

Her stint with Peamount saw Monica on the pitch the day Stephanie Roche scored her famous goal of the season strike and she feels that a soccer goalkeeper is often more mentally drained after a match than physically whereas with gaelic goalies it can be the other way around.

‘In soccer, you mightn’t touch the ball three times in a half, especially if you are playing for aside as good as Peamount, whereas in gaelic you are fare more involved in general play.’

The Meath ladies use the talents of goalkeeping coach Paddy Dowling to work with McGuirk and she has total trust in the Wicklow man.

‘If  I make a mistake I don’t worry about it on the pitch but I’d beat myself up over it afterward at least until I went through the review with Paddy I would relax then.

‘I have sort of worked out routine with him regarding penalties, I never get the ball for example I let the player do that, I never go on to the goal line until they place the ball and then I start doing jumping jacks on the spot to try and distract.

‘Since I came back playing with Meath I have a 100% record on penalties, I have let the two I faced in!’

McGuirk, an operations manager with Aura Leisure in Drogheda, studies the ‘keepers when she watches games and has no doubt who is the best around right now.

‘Kasper Schmeichel is the top man at the moment he was brilliant in the Euros and I guess every goalkeeper watching was sorry for him when he saved Harry Kane’s spot kick only for the rebound to be scored.

‘I know that feeling of frustration only too well I think all ‘keepers do, but I love being in goal it is either in you or it’s not, I wouldn’t really want to play outfield again.’

One red card is it seems one too many. 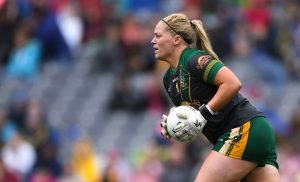