McGuirk; ‘Watch out Cork these underdogs can bite’

Meath ladies goalkeeper Monica McGuirk has revealed there is a confidence within the team that they can pull off, what would be regarded as a huge shock, and defeat Cork in Sundays All Ireland semi final, (Croke Park 3.30)

The sides clashed in the first round of this years championship in Birr just five weeks ago with the Rebelettes coming out on top by two points.

That in itself showed how far Meath have progressed in short space of time having lost to Cork by twenty points in 2015.

And McGuirk has told Meath Live they feel that they have learned even more from that Birr battle.

She said, ‘We would be going into this as massive underdogs but we are underdogs with a bite, we have done our review and analysis of that game and what we have learned is we are every bit as good as them and were just a bit unlucky that day..’

McGuirk, who has two athletics All Ireland medals to her name, in the discus and the shot putt, is adamant there is no reason she cannot add a football one to her collection.

‘At the start of the season, which don’t forget was our first back up senior our goal was to stay in this grade, and we have achieved that so this is a free shot we really have nothing to lose. 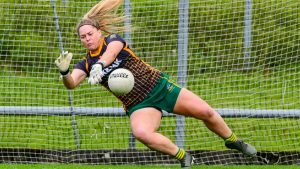