For the first time in nine years Drogheda United exited Oriel Park with all three points on a night of high emotion as prior to the game a minutes silence was held in memory of Dave Conroy the clubs under 14 coach who died in a road traffic accident this week.

Before and after the derby clash Drogs players could be seen embracing Daves son who was in attendance.

There was little to report in the opening half hour bar the early substitution of the injured Daniel Cleary- the defender only lasting 8 minutes on his first home start since the loss to Sligo Rovers in May.

As to be expected in a game between local rivals, every ball was fought to be won and the middle of the field saw a number of robust challenges between Killian Philips and Greg Sloggett.

However, it was a moment of inspiration rather than perspiration which saw Drogheda United take the lead just after the half hour mark as Darragh Markey pounced on a loose ball in midfield to surge forward and tee up Mark Doyle who calmly turned and rolled the ball into the corner of Abibi’s net to open the scoring for Tim Clancy’s men.

The suspended boss was seated high in the main stand but his voice could be heard booming to his players throughout.

The lively debutant Sami Ben Amar had Conor Kane pinned back for most of the first hour. However, the full back overlapped to take a pass from the surging Phillips less than ten minutes into the second half. He ensuing cross was converted by Doyle to make it 2-0 just moments after Phillips himself had been denied by Abibi.

For their part, Dundalk had seen Odumosu deny Hoban with a fine stop before the former Dundalk Academy stopper was powerless to stop a Michael Duffy pile-driver on 58 minutes.

2-1 and game on. Or so it would have appeared to be set up for. Except it never really happened- Dundalk huffed and puffed but couldn’t break down a resolute Drogheda United defence and it was the Boynesiders themselves who looked more dangerous as they broke with pace any time a Dundalk move came to nothing.

In the end they saw out the 94 minutes with relative ease and left Dundalk and their supporters with much to think about. 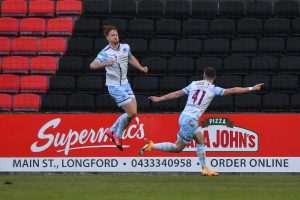