Drogheda man, Michael Collins, who was sentenced to 14 years in jail in 2019,for causing the death by dangerous driving of 20 year old Drogheda girl, Jillian Thornton, at Balrath, between Slane and Ashbourne launched a frenzied attack on convicted murderer Johnathan Keogh, on Monday of last week.

Today’s SUNDAY WORLD, claims that Collins was restrained by a boxer attached to the MTK gym who is currently doing time as well.

The paper revealed, ‘ Collins went for Keogh, who is doing life for the murder of Garath Hutch, witha home made shiv, (blade), and a sock filled with rocks’.

It goes on to explain that there are two possible reasons why Collins attacked Keogh.

Firstly it suggests that a row had been brewing because Kinahan Cartel members, including Keogh were not happy that the killer driver was sharing the same landing as them in the Midlands prison, in Portlaoise.

The alternative possibility suggested by a source is that Collins is struggling to come to terms with his long sentence and may just have snapped.

The Drogheda man has now been subject to disciplinary proceedings and shifted to another landing for his own safety,

At his trial the court heard that in May 2016 Collins had led Gardai in a high speed chase  through Drogheda and East Meath while driving a Mitsubishi Colt before smashing into a VW Passat.

Jillian Thornton who Gardai said was an entirely innocent victim and could be heard screaming at Collins to stop, died in the crash. 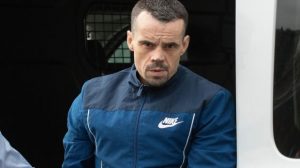