EXCLUSIVE; COUNCIL WORKER SUSPENDED ON FULL PAY FOR TWO YEARS THANKS THEM FOR HIS SUN HOLIDAY

A general operative employed by Meath County Council, but who has been suspended on full pay for almost two years has sent cheeky social media messages to friends from sun soaked Lanzarote thanking the council for paying for his time on the holiday island.

The cheeky chappie soaked up the sun earlier this summer and messaged mates saying, ‘This is the life and the council are paying for it.’

He will be two years out on full pay net month and has been regularly signed off on sick leave by doctors, as well as being the subject of a number of internal disciplinary hearings.

However his social media posts are said to have outraged former colleagues.

A source told Meath Live, ‘In fairness to the council they have pushed the boat out to actually help this guy, they have even gone as far as helping him receive treatment for an issue he was having, but now he is just taking the piss.

‘He’d have been on around €25k a year in wages and incredibly the council may also still be paying him a meal allowance that operatves get which is around €30 a week.

‘The final decision on whether to sack him or not is still in abeyance, but the feeling among his former colleagues is that a decision one way or the other should have been taken long ago.

‘If they decide not to sack him well that’s fair enough but they should have made the call a long time ago, as so far his suspension has cost them the best part of €50k or more.’ 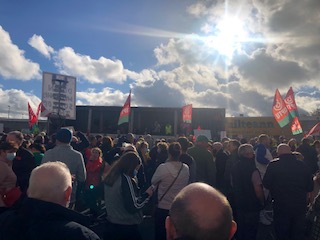