If any ex pat Slovenian are reading this and happen to know Matej Jug, can you please translate the following into Slovenian for him.

FIFA LAW 12; Violent conduct is when a player uses or attempts to use excessive force or brutality against an opponent when not challenging for the ball, or against a team-mate, team official, match official, spectator or any other person, regardless of whether contact is made.

In addition, a player who, when not challenging for the ball, deliberately strikes an opponent or any other person on the head or face with the hand or arm, is guilty of violent conduct unless the force used was negligible.

Now Matej may say he was busy listening to VAR and missed Ronaldo slapping Darragh O’Shea and Nelson would believe him, after all, he missed virtually everything else in last nights Portugal v Ireland clash, I’d even accept the VAR from Italy missed it as he had an off night as well, but what was the assistant referee up to.

Perhaps he used the five-minute delay in the build-up to the taking of the penalty for a toilet break, that must be it he shot off down the tunnel for a leak, there can be no other explanation for him missing the slap.

Matej mate you are there to apply the laws of the game without favour not think, ‘Buck me it’s Ronaldo I can’t send HIM off’, admittedly that may not be what you were thinking if you were thinking at all, but it sure as hell looked like it.

And while we are at it what was so funny about eventually getting one right and booking Ronaldo for removing his shirt that you had to laugh about it.

It would be hard to argue that Ireland deserved to win as they were under pressure for long spells.

What is not debatable is that the player who scored the decisive goals should not have been on the pitch to do so.

In language you will understand Matej, ‘Imel si nočno moro’

The rest of the readers can use Google Translate.

Best of luck to Eamonn Murray’s Meath Ladies in Sunday’s big game against the Jackies.

The fact the Dublin side are going for six All Ireland’s in a row illustrates how good they are, but they look likely to be injury weakened so this represents a real opportunity for Meath.

Nelson is of the opinion that Meath has one big advantage and that is their youth.

Youngsters especially those who have never played in an All Ireland final do now know what they have to lose, those who have been there before realise precisely the enormity of the occasion and can freeze because of that. 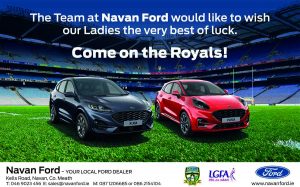 Murray’s marvels, (Expect to see that everywhere if they win),  can do this.

Also on a side note, much has been made of the fact the manager is relaxation personified on the touchline, he neither goes mad fif his side scores or gets angry at a concession.

This should be no surprise as everyone knows the old advertising slogan, ‘Never hurry a Murray’

One big question remains to be answered in the build up to the Kerry v Tyrone All Ireland final.

And perhaps another one.

Has nobody in authority learned the lesson from appointing out of form refs to big games that was clearly illustrated by Conor Lane.

It’s an accident waiting to happen.

Back to the regulars for the Royals