On Wednesday, Minister of State at the Department of Transport, Hildegarde Naughton T.D., performed the official opening of the new R150 Tara Road – Bóthar na Teamhrach, which links Laytown and Bettystown in County Meath. The official opening took place in the presence of Cllr Sean Drew, Cathaoirleach of Meath County Council, and Cllr Elaine McGinty, Cathaoirleach of the Laytown-Bettystown Municipal District.

The new 900m single carriageway was developed by Meath County Council at a construction cost of approximately €5.5m, with funding provided by the Department of Transport. As well as the new road, the project also includes the upgrade of an existing roundabout, new roundabouts and junctions, and a new public car park with 85 parking spaces due to open next month.

The process of officially naming the road was a n

ew, more open, and participative pilot initiative of Meath County Council, in order to give local communities a greater input and engender ownership of their public infrastructure. The process was in two phases, the first phase saw local schools in the immediate area and members of the Municipal District nominate suitable names, to form a list of options.

The second phase involved a social media poll, whereby members of the public had the opportunity to vote on their preferred option. The results of the poll, which attracted a total of 986 votes over a six-day period, saw the public choosing ‘Tara Road – Bóthar na Teamhrach’, in recognition of the area’s connection to the Tara Brooch which was found in East Meath in 1850.

Speaking at the event Minister Naughton said “I am delighted to be here today to officially open Tara Road which will serve the communities of Laytown and Bettystown and help ease congestion in the area. When improving our existing road network, it is vital that we take account of the needs of all road users, including cyclists and pedestrians. In this regard, we have ensured the provision of segregated cycling and walking infrastructure on the new spine road.

As both towns are serviced by two primary schools a

nd a post-primary school, the scheme will improve access to these schools and provide a choice of routes to and from the schools. With students returning to school for the Autumn, the extended route with cycling and walking infrastructure allows families to consider travelling by foot, scooter or bike and making the school run both active and sustainable.”

Cathaoirleach of Laytown/Bettystown MD Cllr Elaine McGinty added, ‘This new road is a very welcome addition to the Laytown-Bettystown area as it will significantly improve traffic flow in the area, minimise congestion, improve the local environment and bring a much more pleasant experience for all road users. It’s great to see the new pedestrian and cycling infrastructure in the area, which will I hope be well used by children and their parents when travelling to and from the schools in the neighbourhood”. 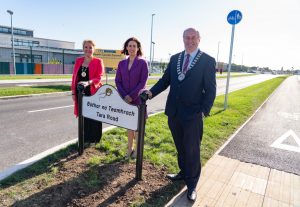 SOS; SEND IN THE CLOWNS – IF YOU KNOW ANY!