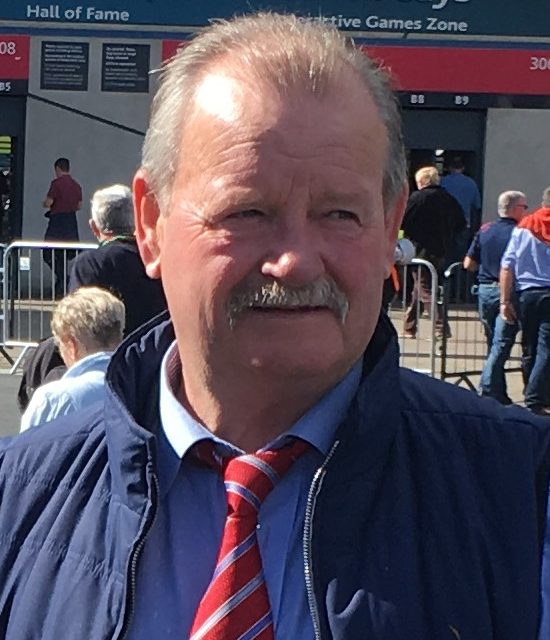 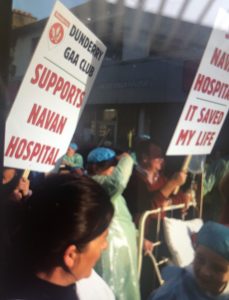 Tony Coogan, among the crowd at the previous protest back in October 2011

A well known GAA fan who claims he owes his life to the efforts of staff at his local A&E would be happy to lead a huge protest march in a desperate effort to keep the facility open.

In 2009, Tony Coogan, from Dunderry, who was then fifty-four, collapsed, as he left Pairc Tailteann GAA grounds, in Navan, just a couple of hundred yards from Our Lady’s Hospital.

His travelling companions, Meath All Ireland winning footballer Barry Callaghan, and former county player Stephen O’Rourke took him straight to A&E where staff realised he was having a heart attack and immediately revived him using CPR.

Days later he had a quadruple heart bypass in Dublin’s Mater hospital and next Saturday (Oct 30th), he will head up was is expected to be a 15,000 strong protest march against new HSE proposals to close the department.

He told Meath Live, ‘ If it wasn’t for Navan A&E I’d be as dead as a maggot, myself and my family know only too well how important it is to keep the place open, we all walked on a previous protest march in 2011 and we’ll be there again this time.

‘If it wasn’t for Barry’s quick thinking I’d be dead but crucially if it wasn’t for the fact the hospital in the town was open I would certainly not be here, I don’t think I’d have made it to Drogheda, Blanchardstown or Cavan, the places the HSE are suggesting can cover Navan, in time.

‘Another great Meath player, the surgeon, Gerry McEntee, told me I was a lucky man to be alive if Navan A&E  wasn’t there I’d be gone. It is not just me that was lucky there’s been hundreds if not thousands more like me.

‘The major employer in Navan at the moment is Tara Mines and anyone will tell you mining is a high-risk industry, lads pick up knocks there on a daily basis and what if something major went wrong and there was no emergency department open locally.

‘Tara has a great safety record but sometimes things happen that are out of everyone’s control so we need the service here in the town.

‘Back in 2005 there was a horrific bus crash that saw five school girls killed, how and many more were treated in Our Lady’s that day back in May 2005.

‘The previous protest seemed to succeed but now they are coming after it again and I am not sure there is a strong enough will to fight the cuts again.

‘The HSE just see a balance sheet, to them Navan hospital is just somewhere they can save money on but to everyone in the county Meath it is a crucial life-saving service.

‘I’ll certainly be there as you never know when you will need it, I’m living proof of that, but I wouldn’t be living at all had it been shut back in 2009.’

The march is being organised by the Save Navan Hospital group, headed up by Aontú leader and Meath West TD, Peadar Tóibín and despite reassurances, earlier this week, from health minister Stephen Donnelly, that the decision to close the A&E had been paused, he insists the protest will take place. Tóibín said, ‘ Pausing it is not good enough we need to hear from the minister that it will never ever be closed.’

In a statement, the hospital confirmed that it had “paused orthopaedic day case procedures in order to relieve pressures on the Emergency Department”

It said the situation is under review and procedures will resume as soon as possible.

The hospital said, “it is extremely busy with people attending for a range of complex and diverse treatments”.

It is asking patients to consider their care options before attending the Emergency Department.

“If you do come to the Emergency Department and are not triaged as seriously ill, you may need to wait for a long period of time to be seen. Patients who require urgent care will be prioritised” the statement read. 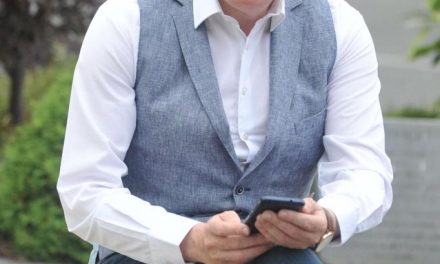 EXCLUSIVE; Ray Butler; My diabetes meant I had to change or die