EDITORIAL; THE FEET ON THE STREET SPOKE VOLUMES 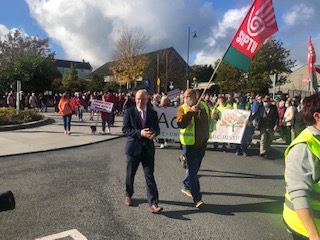 The feet on the street in Navan last Saturday told their own story
The people of the county have spoken again with actions, not words.
They turned out in their thousands to send the message back to the politicians and the HSE at the top level.
Navan Hospital needs its A&E and services. Enough is enough.
It was a chilly afternoon and yet close to ten thousand people chose to leave the warmth of their homes to let those in charge of services at Navan hospital know what they feel.
The sheer volume of numbers that turned out spoke volumes, if any politician or HSE official ever doubted the depth of feeling locally about the issue they don’t doubt it now.
We are the fifth biggest county in the country and as Dr. Ruairi Hanley pointed out
We are not just a small hospital on the crossroad down the country to give in to the whims of the D4’s. 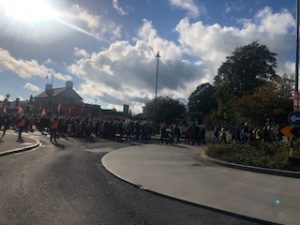 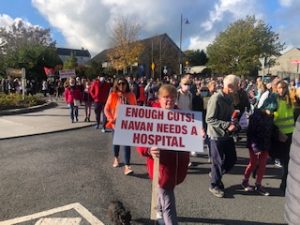 For those in the health care business, it is an oft-repeated mantra that the safety of patients is paramount.
Hanley posed the crucial question, ‘ What is safer, is a trolley in Drogheda somehow better than  a bed in Navan, is suffocating in an ambulance better than an intensive  care bed’
We don’t need transformation as the head honchos describe it, we need services in Navan
We make no apologies for asking again,
What is better :
A bed in Navan or a trolley in Drogheda
ICU beds in Navan or the back of an ambulance
Living people or dead people that’s the transformation these people speak of. 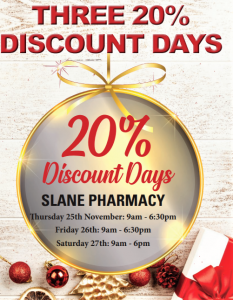 Dr. Ruairi Hanley spoke of his great admiration for the people of Meath.
Not a native of the county but living in what he described as the greatest county in Ireland and some of the greatest people he has ever met he was eloquence personified giving a voice to the masses.
All the politicians who addressed the audience spoke well but none of them are experts in the health care sector as  Dr.Hanley.
He reminded us that the staff at Navan has dealt with a pandemic over the last twenty months and asked us to imagine what would have happened if they were not there.
We would have patients dying far from home, suffocating in ambulances but thanks to Navan  Hospital this didn’t happen.
It put it all in perspective.
For everyone’s sake let’s hope it is not a case of doctors differing and patients dying.
The silent majority in Meath have just become very vocal, they found a cause and have rallied to it.
Ignore them at your peril.