has raised concerns as to why he failed to turn up and give his view on the issue.

We spoke to, Cormac Corr, Cathaoirleach of Ógra Fianna Fáil Meath West,
“there was quite a big deal made about Minister Damien English’s absence. Shane, Peadar,
Johnny and Darren, all brought it up. There was bipartisan agreement that it was a
disappointment that English didn’t show up to the rally, among the people and politicians at
the march on Saturday”, Corr replied.

Last Saturday, a large rally was held in Navan town protesting the threat of the A&E in
Navan Hospital closing. There was a huge turnout, but what was significant was the number
of youths who got involved to protest for this cause. “Mól an Óige agus Tiochfaid Sí”, praise
the youth and they will flourish, as the saying goes. 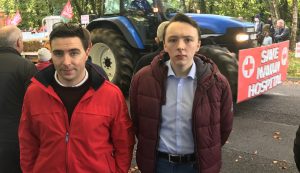 Cormac Corr commented “As a young person active in my community, I was honoured
to march alongside the people of Navan and Meath at last Saturdays Save Navan hospital
March. During my time as chairperson of Meath West Ógra Fianna Fáil, it has always been
clear to me that the local Fianna Fáil organisation stands firmly behind the campaign to save
Navan hospital. It was very clear last Saturday as the Ógra unit was joined by a huge number
of senior party members and elected representatives from across the county who all marched
alongside the thousands of people in attendance. Meath West Ógra is a progressive
organisation with a huge emphasis on Community activism, Navan hospital is at the very
heart of Meath &amp; it is in the interest of all communities in this county that it remains
operational – Meath West Ógra Will always support Navan Hospital &amp; all of its hardworking
healthcare staff and workers”, concluded Corr.

Meath Live also managed to track down Caoimhín Ó Loinsigh, President of Ógra Shinn Féin
An Mhí. “I was at the Save Navan A&E Rally on Saturday because it is absolutely pivotal
that it remains open, not just for Navan’s sake but for the whole County of Meath. A lot of

families that I am aware of are afraid to go to neighbouring hospitals such as Drogheda or
Connolly due to amounts of waiting time in the department, the amount of time traveling or
just simply they have no way of making it over there. I had a recent family member who used
Navan hospital and it was well needed and it extended his life period by a long period of time
and we got to spend that last period of his life with him thanks to the staff in Navan hospital. 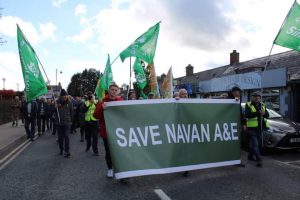 It felt great to be a part of this small movement, it felt electrifying as it gave so many people a
common goal to get out and have their voices heard. So many people not only want this
department, to a lot of people this is their lifeline and it gave me the pride to stand up for the

people that cannot get out of their bed because they are too sick and cannot have their voice
heard”.

At Monday’s Meath County Council meeting, Cllr Michael Gallagher (Sinn Féin) said that
Navan A&E has previously been under threat of closure, but it was “the people of Meath that
kept it open”. Navan A&amp;E doesn’t just serve Navan, it serves the whole County. The youth
have a pivotal role in making sure their voices are heard and that Navan A&E stays open.

Photograph Of the day