In the end it could come down to one man.

Forget the other twenty nine players on the pitch, ignore the fact that in Thomas O’Reilly and Oisín Martin Wolfe Tones have a match winner and a workhorse respectively, avoid contemplating that in the McEntee’s and Donal Lenihan Dunboyne have matchwinners.

If Ward delivers, and in fairness when hasn’t he? then he will guarantee Wolfe Tones somewhere around six points, with the possibility of a spectacular goal thrown in, in tomorrow’s SFC decider, and if he amasses that total then the Kilberry based side will be hard to peg back.

It really is that simple, and as a rule of thumb the bigger the occasion the better Ward performs, in the semi final shock of Ratoath he was the stand out player for Michael McDermott’s outfit.

The Tones have displayed serious intent from the time they first contested a throw in this season, in their championship opener they held one of the pre-championship favourites, Gaeil Colmcille, to a draw and in round two they stunned another fancied side when they obliterated Simonstown by 10 points.

However even allowing for that they were still second favourites against Ratoath but the success ensured they are no longer under the radar.

Dunboyne arguably have more quality individuals but the Tone, and the possibility exists that one of the Black and Yellow’s star individuals Ronan Jones may miss out through injury.

Donal Lenihan can do for Dunboyne what Ward can do for their opposition and it could well turn into a sharpshooting contest,

It will be tight at the end but the feeling is that a week after the clocks went back Cian Ward can turn the years back to when he was in his prime and give his team the platform they need to succeed, 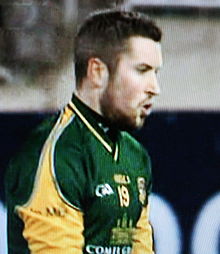 Under 20 side to face Dublin is announced