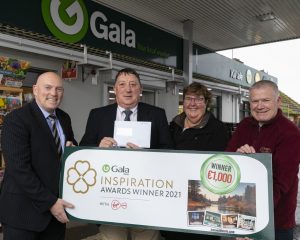 After a nationwide search to uncover Ireland’s most inspirational people, John Tobin from Trim(second from left), is celebrating after being named an Inspirational Hero in the Gala Retail and Virgin Media Inspiration Awards.

Established to shine a light on those individuals who make Ireland a better place with their selfless acts and inspirational deeds, John stood out for all his efforts in fundraising for many charities such as Special Olympics Ireland, where he has raised over €132,000 in the past 11 years.

Inspirational people from across Ireland were nominated for the Gala Retail and Virgin Media Inspiration Awards, with 26 inspirational county heroes being named from the hundreds of entries received

John is a key volunteer fundraiser and is the person who spearheads the annual Special Olympics Ireland Golf Classic. John’s golf classic has just completed its 11th successive outing, not even COVID-19 or knee surgery could stop John from making the event happen and being a complete success.

Over the last 12 years, John’s golf classic in aid of Special Olympics Ireland has raised over €132,000. A huge sum of money has been used to provide sports programmes to people with intellectual disabilities throughout the Leinster region.

Other charities John has helped include, Crumlin Children’s hospital, Irish Wheelchair Association, and his local St. Joseph Hospital Trim to name but a few.