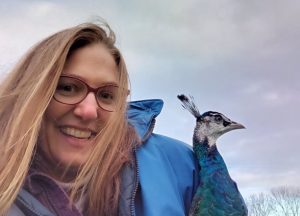 There was unbridled joy in the Stapleton household earlier today after Winston the family’s pet peacock who as we reported earlier in the week had been missing since Sunday was found safe and well.

Verena Stapleton told Meath Live, ‘My brother in law Alan spotted him at the other end of Graig’s Lane where we live in Dunmoe and got word bac to me that he had seen him.

‘For the last few days, I have been carrying supplies of red grapes and blueberries around with me as they are his favourite treats so when I went to where he was I held out a handful of blueberries and he came and took them, as he did that I grabbed him and bundled him into the car.

‘Initially, he resisted but it was almost like he thought ‘She is bringing me home’ and stopped struggling.

‘He has lost a lot of weight but we have him in his shed and are feeding him with protein pellets so he’ll be grand.’

HIT AND RUN IN KELLS