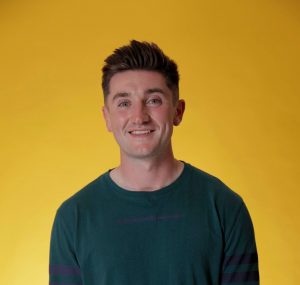 Slane man, Daniel Forde, has revealed that his appearance on hit RTE show, First Dates Ireland, came ‘about, ‘After I had a few cans!’

The premise of the show is that a couple basically meets for dinner on a blind date and sees how they get on after that.

GAA coach Forde was paired off with make-up artist Ciara from Dublin and the pair hit it off so well she even laughed at what the Slane lad conceded was his ‘shite Dad joke’.

Daniel told Meath Live, ‘The show was recorded last August and while we went out on a few dates afterwards and are still in touch we are not a couple, she’s a lovely girl and a great laugh.

‘How I came to be on the show is simple, a mate suggested I’d be good on it, so I sat down with a few cans and watched it and thought, ‘sure why not’ filled in the forms and that was that.

‘It is a completely blind date although there is a reasonable chance you will meet someone compatible as they ask you for a list of interests and they try and match you up that way.

‘It was kind of weird watching myself on it but overall it was great craic.’

Daniel watched the show with friends and then had to face the ultimate judgement from his parents, Donal and Michelle.

And Michelle was keen to have a word with him.

‘She told me I came out with some choice language on it, but sure it wasn’t anything she didn’t hear me use before.

SOS; SEND IN THE CLOWNS – IF YOU KNOW ANY!