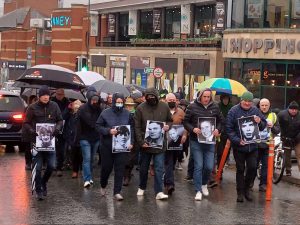 Last Sunday marked the 50th Anniversary of Derry’s Bloody Sunday. A massacre that took place in the Bogside area of Derry in 1972, where British Soldiers shot 26 unarmed civilians during a Civil Rights march, resulting in 14 people being murdered. The families have never seen justice and no Soldier has been held to account.

On the 30th of January, a vigil was organised in Navan. Over 200 people were in attendance. Mourners met at Kennedy Plaza and walked to Market Square with posters of the victims, black flags, and candles.

There were a couple of speakers at the vigil. Caoimhe Sloan spoke first. Sloan described how the victims were injured and made a note that two women were also shot. She said that “today is the 50th Anniversary of Bloody Sunday and we stand in solidarity with the families of Bloody Sunday. It is down to their determination to find truth and justice. It is only for them that the truth of Bloody Sunday is known throughout the world. In 2022 we owe it to these families and their victims to build a new and better Ireland for all our citizens. One that will never allow injustices of the past to be repeated. The days of rights being denied are never coming back”.

Another speaker, Ryan Carlin, who is a native of Derry, told the crowd, “For as long as I can remember, Bloody Sunday has been part of my life. The victims’ faces, the harrowing scenes of Bloody Sunday are depicted on the murals across the Bogside”.

“The events of Bloody Sunday have cast a long shadow, so many innocent families unjustly devastated that day. Their grief was compounded by the subsequent British coverup, which labelled the victims as bombers”.

“The people of Derry always knew it was a lie but they had no voice loud enough to be heard. Everyone in Derry has a story to share on Bloody Sunday. Its effects on the city were far reaching. My father recalls as an 11-year-old boy watching his mother fall to her knees, screaming when they heard the news. My Uncle who was 15 went to the march, he came home that night, but many others didn’t”. Carlin also revealed that a relative of his, gave evidence at a Bloody Sunday inquiry.

Cllr Eddie Fennessy recited Seamus Heaney’s Poem “The Road to Derry”. The names of the victims were readout. And lastly, a young boy named Owen Darcey played the tin whistle, and after a minute’s silence was observed.

After this, a group picture was taken with people holding posters of the victims’ faces. 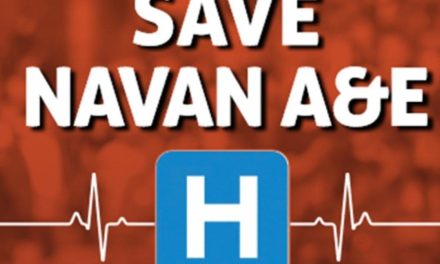