Sinn Fein TD for Meath West has written to the Minister for Health Stephen Donnelly calling for the reversal of the HSE’s decision to withdraw Speech and Language services at special schools.

He told Meath Live, ‘I was appalled to hear of the decision by the HSE to withdraw the service of the speech and language therapist at St Marys Special School in Navan.

I have spoken to the Principal who speaks so highly of her staff, and the work that they do at the school.

The therapist is not only working with the fifty five pupils, but she also works closely with the principal and trains the teachers on how best to teach the pupils every day.

Her work doesn’t stop there, as I’m told she works very close with all the parents of the pupils at the school.

If the school were to lose such a service, it would have a detrimental effect on the pupils, and would most definitely see them regress.

I raised this matter in the Dail this week to highlight the need for the Minister for Health and his Department to engage more with the school, and for the continuation of the Speech and Language therapist position.

Out of the fifty-five pupils, only five will keep working with the current speech and language therapist leaving fifty pupils left on waiting lists, some up to two years or more.

The Parents are saying there is no alternative plan in place, and if there is they haven’t seen it nor was it discussed with them.

For all that’s in it, it appears that this withdrawal by the HSE is nothing more than a cost cutting exercise, once again targeting the most vulnerable groups.

We should not have to keep fighting for basic services such as a properly supported education.

The Minister must Intervene as a matter of urgency, Children cannot be collateral damage because of these decisions.’ 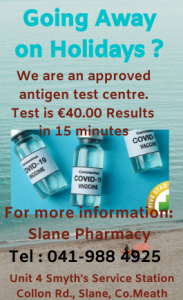 PENSIONER WHO DIED IN KILCARN COURT ACCIDENT IS NAMED