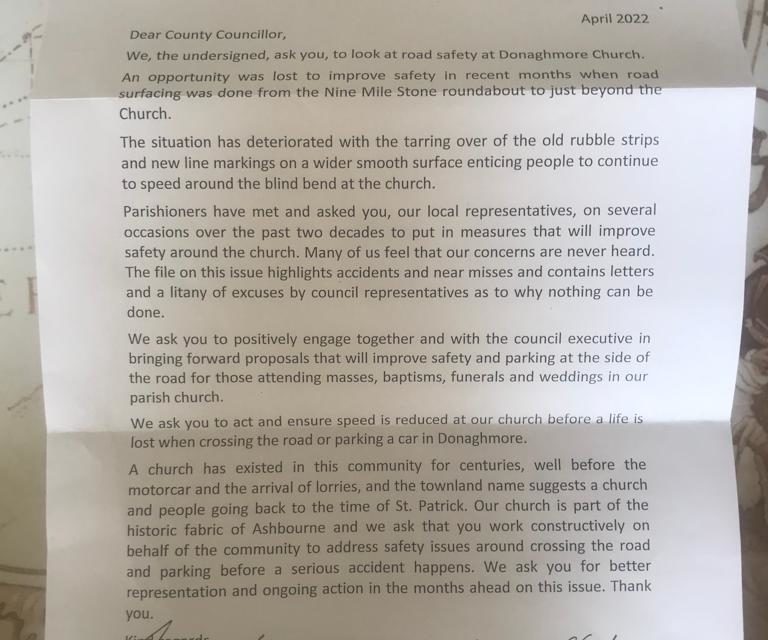 Councillors in the Ashbourne area are feeling the heat of another blast from the pulpit after local priests Fr Michael Gilmartin PP and Fr Ciaran Clarke CC have set up a petition which claims local councillors are ignoring safety issues at Donaghmore church.

And as our exclusive photo shows the priests claim the councillors are coming up with a ‘litany of excuses’ as to why safety measures have not been put in place.

The petition which is available for signing inside the church is expected to receive huge backing locally.

In it the priests, who have both signed it at the bottom, claim, ‘Parishioners have met and asked you our local representatives on several occasions over the past two decades to put in measures that will improve safety around the church.

‘Many of us feel that our concerns are never heard, the file on this issue highlights accidents and near misses and contains letters and a litany of excuses as to why nothing can be done.’

The priests then put up a plaintive plea, saying, ‘We ask you to ensure speed is reduced at our church before a life is lost when crossing the road or parking a car at Donaghmore.’

The petition which has been in place for some weeks now is likely to further anger councillors, who at their last municipal meeting expressed disquiet over the issue being raised publicly.

Comments made from the altar at masses on Sunday, April 3rd which suggested councillors had done little for the community was badly received at the Ashbourne Municipal district meeting the following Tuesday.

A number, though Meath Live understands not all, of the councillors agreed to get local authority bosses to write to PP Fr Michael Kilmartin outlining exactly what works have been carried out in the vicinity of Donaghmore church in the last 18 months. 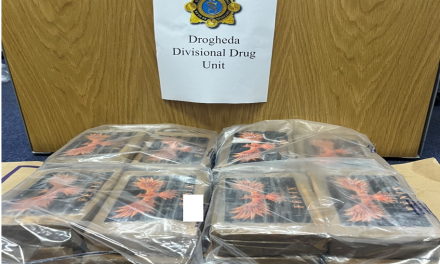