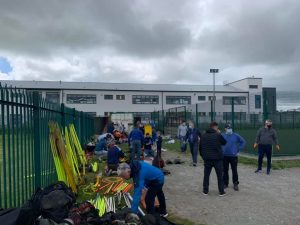 A teenager who was a former player with a soccer club has admitted starting a fire that caused €30,000 worth of damage to his old team’s property.

Dundalk Circuit Court was told that the now 17-year-old boy, who cannot be named because of his age accepted he began the blaze which caused the damage to two containers belonging to highly regarded schoolboy side Drogheda Boys on May 15th last year.

The youngster who has no previous convictions told Gardai he didn’t intend for the shipping containers which housed training and maintenance equipment to catch fire.

Fire crews were called to the inferno at Marley’s Lane in the County Louth town after a wheelie bin was set on fire and shoved against one of the containers.

The teen told Gardaí he had lit pallets beside one of the containers and the fire “wasn’t that big” when he left the scene.

However it has emerged that as both containers were made of steel the heat from the fire in the first one had been conducted to the second.

A video discovered on the teen’s mobile phone showed three individuals drinking and dancing in front of the fire.

In a victim impact statement, Club chairman Graham Campbell outlined how children who had turned up for their first day with the club had seen what occurred and the club was without a defibrillator and other equipment for a number of months.

The court was told the teen did not identify the two others involved in the investigating Gardaí but that officers accepted that he was considered easily led and the youngest of the three.

The youth’s barrister said that his client had not taken up bail since he was charged in February, as his mother considered she had to be cruel to be kind. The Probation report outlined how the 17-year-old has an insight into his offence and seriously regrets his behaviour.

Judge Dara Hayes remanded the teen in continuing detention and directed the preparation of an updated Probation report for the court sitting on June 20th.