Let’s face it most local authority publications are boring. 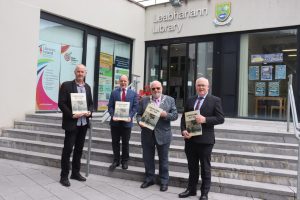 Pictured at the launch of the publication of Curraghtown, July 1922 is Cathaoirleach Cllr. Nick Killian with author Tom French, Barry Lynch, Director of Services and Ciaran Mangan, County Librarian.

Curraghtown, July 1922 is published on the centenary of the battle of Curraghtown which took place on 5 and 6 July 1922, and is a companion to Trim, September 1920. This programme of publication forms an important part of Meath’s Decade of Centenaries 2012-2023 Programme which aims, in keeping with the principles of the national programme, to be broad and inclusive, to highlight the economic and social conditions of the period, and the shifts in cultural norms.

Between April and June 1922 clashes in Meath occurred between pro- and anti-Treaty forces in Slane, Dunshaughlin and Athboy. Following the shelling of the Fourt Courts in Dublin, The Meath Chronicle of 1 July 1922 reported ‘scenes in Navan of warlike character’ – significant movement of Free State troops by railway, the commandeering of cars, lorries and provisions in Skryne and Kilmessan, and the early arrests of several leading republicans in Navan and Trim.

On 5 July 1922 Michael Hilliard’s Navan IRA company based at Curraghtown House, was joined by companies from Kilberry, Rathkenny, Clongill and The Commons, bringing their strength to thirty-three men. A force of 200 Free State troops surrounded the house and a battle ensued that continued through the night. By the time Father Ellis of Dunderry and Father Kilmartin of Navan had brokered a surrender, George McDermott from The Commons and Seán Nolan of the Free State army lay dead.