in trap two. In the semis, Serena Ace won in a clock of 20.78 but the places were reversed last night and the Keeley McGee trained

Hawkfiekd Ozark found his sprinting boots out of the traps and was never headed.

Well done to the connections who picked up a prize fund of €20,000 purse. 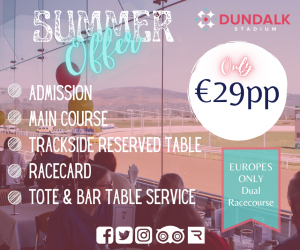 sponsoring the other three races.

The Halford-trained Twilight won comfortably from Ides of August 21/4 lengths and the same again from Eight Eight. First picture above shows the panoramic view of the Mourne Mountains as the horses and jockeys are approaching the last furlong. The second picture shows some of the large attendance at the meeting yesterday.

Spirituoso was no match for the winner being backed in from 4/1 to 5/2.

With the serious side of racing, there was plenty of entertainment and music and fun for the kids all through the day and night.

Dundalk Stadium boasts a unique position in the fact it is the only dual track in Ireland and abroad. They do a fine job and entertainment

and fun is part of the formula that gives a great day or night out as the case might be for family, friends or corporate events.