The row over the HSE efforts to close the A&E in Navan hospital has spread to neighbouring county Cavan.

Cavan County Council passed an emergency resolution to send a letter against the downgrading of the emergency department at Our Lady’s Hospital in Navan.

Claims were made that ambulances which bypassed Navan last weekend to ferry patients to the Lourdes hospital in Drogheda were then sent back to Navan as Drogheda was full to the brim.

With protests taking place outside Navan and Drogheda Hospitals last Monday, Cavan’s elected representatives met for their December meeting with concerns raised that, if Navan Hospital is downgraded as planned, the knock-on effect will be additional pressure on an already stressed Cavan General Hospital. It was revealed that as recently as last month, on two consecutive  days, management at Cavan General were forced to issue public appeals asking patients to seek alternative options to the Emergency Department due to delays and limited bed capacity.

From yesterday (Wednesday, December 14) an updated protocol means that ambulances will no longer bring critically ill and unstable patients to Navan under HSE plans to replace the ED there with a 24-hour medical assessment unit.

Independent Cllr Shane P O’Reilly, who tabled the emergency motion for discussion, said that, at the weekend, as many as seven ambulances were “parked” outside Drogheda hospital with “no beds available in A&E”.

“They were full to capacity from Thursday,” he said before claiming those same ambulances were later transferred back to Navan.

“Drogheda will not, and cannot cope, if Navan A&E closes,” he said

Cllr O’Reilly pointed out the ramifications of this, as per staffing rest rules, was that there were “no ambulances” available in either Cavan or Monaghan last Saturday night. Citing the large number of industrial businesses in the east of the county, and their proximity to both Navan and Cavan in case of a crisis, Cllr O’Reilly stated that he was in “no doubt lives are going to be lost” if this is pushed through.

Fianna Fáil’s Clifford Kelly seconded Cllr O’Reilly’s proposed motion to write to the minister and chief executive of the HSE opposing the introduction of the new protocol “until such time better facilities are in place”.

Aontú’s Sarah O’Reilly commended her party leader Peadar Tóibín for his efforts to support Navan hospital to date, and warned that “all hospitals will come under pressure” if the A&E is downgraded.

Cllr Craig Lovett (FF) and Sinn Féin’s Paddy McDonald also supported the motion, while Fine Gael’s TP O’Reilly accepted that greater “clarity” was needed in relation to the decision being made. 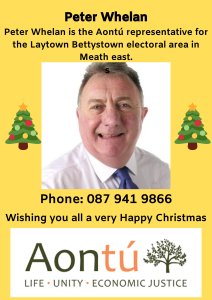